From East to West: Pakistan, Afghanistan, Iraq, the dream of Kurdistan, Syria, Lebanon; and turning South:  the Palestinian State and Yemen.  These are the countries who are experiencing humanitarian crises across the Middle East. Who is not?  Probably Iran, Saudi Arabia, Bahrain, the United Emirates, Oman, Jordan, and Israel are experiencing a modicum of stability; even though Israel is at war with the Palestinian State and Iran's population is suffering quite a bit under the world's sanctions over their nuclear program.

Who is helping the masses who are on the run from the war(s)?  Try Europe and America.  Who is not helping at all?  Would you believe fellow Arab states like Saudi Arabia, Bahrain, Oman, and the the United Arab Emirates.  Therein lies the answer to my question - "Who is to Blame?".

I am going to argue that it is Islam itself that is to blame ... in the long run. Most people will disagree, I am sure, and point to the United States and President Bush's aggression in Iraq as the fundamental cause; and I think they would be right - in the short-term.  Absent that policy decision, it is very likely al Qaeda would have remained dormant in Iraq and there would be no ISIS to threaten the world today.  In spite of the Bush-Cheney-Rumsfeld rhetoric to the contrary, it was well known then, and history has proven, that Saddam Hussein was no friend of al Qaeda; if fact, they were somewhat antagonistic toward one another. (And, oh by the way, the West's sanctions against Hussein to prevent a return to weapons of mass destruction actually worked, Saddam had none and couldn't get any.)

But ultimately, that view isn't quite right, that these series of crises are Bush's fault.*  All you have to do is step back a few generations to the end of WW I where the Armistice created, out of whole cloth, the Middle East we know today, and with no regard for the realities on the ground.

Consider the map of the Ottoman Empire from 1914.  I suspect you do not see much that is familiar, unless you are a student of history (or remember your history lessons in high school); although you might be able to discern a few future modern states.   On the right side of the map is Persia ... today that is Iran.  Where the words "Ottoman Empire" are located, most of that is Turkey today.  Same for the Arabian Peninsula where Saudi Arabia, Yemen, or Oman are located?

The modern Middle East boundaries were drawn by either the French and British, under Mandates from the League of Nations after WW I; or by internal wars at the conclusion of WW I.  Modern day Turkey and Saudi Arabia were established via the latter means, while Lebanon, Syria, Transjordan, Palestine, and Iraq came into being from the Mandates.

Mark Sykes, representing the British government, and Francois Georges-Picot, of the French government, are most responsible for how Middle East boundaries were drawn as the former Ottoman Empire was carved up.  The intent, apparently, was to make the divisions coincide with major ethnic groups, e.g. Jews, Christians, Sunni Muslims, Shi'a Muslims, etc; but, because these two men found straight lines simple, they thwarted their own plan.  The idea was to have Palestine (Br) largely populated by Jews, Transjordan (Br) by Muslims, Lebanon (Fr) by Christians, the Bakaa Valley (Fr) area went to Shi'a Muslims, Syria (Fr) and Iraq (Br) became the domain of Sunni Muslims, except, importantly, the coast of Syria which was Alawite Shi'a and Eastern Iraq which is also Shi'a.  Because of the way the borders were actually drawn, the resulting admixture of ethnic groups, tribes, and religions within a single border was a powder keg ready to explode.- and explode it did.

Between the two World Wars, the French and British were kept very busy suppressing a series of revolts throughout the region as each nation struggled to gain the independence that was promised, but not given to them if they worked against the Ottomans during WW I.  By the beginning of WW II, Syria, Iraq, and Jordan had gained nominal independence while Lebanon received it in 1943; Palestine remained as a British Mandate for the Jews.

The fighting did not stop there.  Instead of revolting against the French and British, which still maintained strong influence, they made war against each other as the various tribes and sects attempted to gain power.  That all ended with WW II when Britain and France reasserted their control.

By 1946, all foreign troops left Lebanon with a peaceful resumption of power; only to fall into alternating hot and cold civil war between the Muslims to the West and the Christians in the East.  Likewise, in 1946, the British gave Transjordan, later just Jordan, it independence.

Between wars in Arabia and Anatolia, as well as idiotic nation creation by France and Britain dividing up the spoils of war, the current set of nations were born - save Israel, Qatar, the UAE, Kuwait, and Oman.  Both Kuwait and Oman have effectively been sovereign countries for centuries, while the other Arab states came into being in 1971.  Israel, of course was carved out of Transjordan in 1947; its current border is in roughly the same place the Kingdom of Israel existed in 1020 BCE. 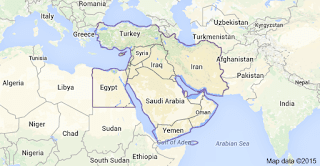 So, here we have a more fundamental reason behind today's humanitarian crises (plural) in the Middle East. There was no thought given by Britain and France, via the League of Nations, about the real-life consequences resulting from where they drew their self-serving borders for Iraq, Lebanon, and, Syria,  One unfortunate outcome was the marriage of two Muslim faiths, Sunni and Shi'a, who have hated each other for millennium; another was that no provision for Kurdistan which led to the near genocide of the ethnic Kurds by Turkey, Iraq, and Iran; they are still struggling for their existence today.

The European Powers remained dominant, but faced growing resistance, until they gave the region its "freedom", but installed "Sunni" leadership loyal to them.  The resistance kept growing and leadership changed hands a few times, but always under the British thumb.  WW II brought British control once more.

The whole region remained, in one form or another, under British occupation and West-friendly national leadership until 1954 when the British removed their military presence.  Internal turmoil in Iraq boiled over which ended in a coup in 1958, where the Western-oriented government was replaced by a series of dictators. The king of the hill ended up, in 1978, being the Hitler of the Middle East, Saddam Hussein, and his Sunni Ba'ath Party.

With this ascendency of the Sunnis in Iraq (and the Shi'a in Syria), the oppression of the minority Shi'a began in earnest.  It was the atrocities of this sick leader and his sometimes successful attempts to obtain weapons of mass destruction that ended up being the public justification of President Bush, Vice President Cheney, and Secretary of Defense declaring war on Iraq.

But, are the above unfortunate political machinations the root cause of the humanitarian crises in the Middle East?  Hardly!  For the onion can be peeled back another layer when you consider what the Middle East was like prior to Muhammad the Prophet's ascendancy and then in the aftermath of his death in 632 CE.

To say that the Middle East today is peaceful, when compared to the Middle East around 600 CE is a big understatement.  The players at the time were the Byzantines and the Persians; Islam was in its formative stages.  In the 50 years between 572 and 628, the Middle East was at war for 45 of them. In these wars, 100,000s of Jews, Christians, Persians, and Arabs were either killed in battle or were simply massacred   Near the end of this period, Islam began its first expansion when Muhammad, through a succession of attacks, overran Mecca.

Another factor frequently overlooked by modern Western strategists is that the Middle and Near East, from Turkey to Oman, and the Mediterranean to Thailand, more than anywhere else on earth, society was/is based on tribal allegiances; and this has not changed over the millennia; a critical, and so far fatal point that has been missed by every nation-building outsider that has tried to tame the Middle East.

With Muhammad's death came a struggle for power by the various tribes Muhammad had cobbled together under the Muslim umbrella.  During the succession of Caliphs between 632 CE and 692 CE, and after several wars, Islam coalesced around two beliefs as to who the appropriate descendants of Muhammad are that should rule Islam.  The larger of the two groups are the Sunnis (75% to 90%), while Shi'as make up around 10% to 20%.

How all of this history relates to this hub is that the war between the Sunnis and Shi'as has never stopped, it's like the Hatfields and McCoys or the Catholics and Protestants  Sometimes there are lulls, sometimes outside forces suppress the violence for a period of time, but decade after decade the conflict simmers.

While Catholics and Protestants have laid their arms aside and true hostilities have ended, the beef between these two Christian religions still percolates below the surface.  Likewise, animosity between the Jews and Christians is kept alive by the extremes of these two religions.  Of course, there is open warfare between Islam and the Jews at this moment in time; an extension of the millennia long battle between Jews and Arabs.

It is THIS dynamic that I argue is behind today's misery in the Middle East. Assuming you have a magnifying glass, you can see where the competing factions of Islam come into conflict.

Demographics of Islam
By Peaceworld111 (Own work) [CC BY-SA 4.0 (http://creativecommons.org/licenses/by-sa/4.0)], via Wikimedia Commons

Let try to interpret the above map for you because I think it is important to understand the relationship of the various factions of Islam to one another. First, notice that Islam, as a major religion, has spread well beyond the borders of the Middle East; from the West African coast to Indonesia.  From left-to-right, the distribution goes as follows:
Got That?

Consider the map again, this time in context of where the Sunnis and Shi'as make contact. Can you guess where all of the historic flashpoints have been since Muhammad died?  What we see is:

Now, let's think about where all of the misery exists in the Middle East:

What is in common here is that each of these conflicts are Muslim on Muslim religious wars.  The same religious wars they have been in since 629 CE; I rest my case.


* Oh, don't try to argue that it is President Obama's fault for not bullying Iraq into changing the status of forces agreement with the Bush administration which required the removal of all U.S. troops from Iraq.  The fact is, Obama tried to get the agreement changed and Iraq was having none of it.

Posted by Unknown at 5:57 PM No comments: