The Battle Over President Obama's Nomination for the Next Justice of the U.S. Supreme Court

THE EXECUTIVE BRANCH
IT GOES WITHOUT SAYING THAT PRESIDENT OBAMA WILL nominate someone to fill the vacancy left by the very conservative Associate Justice Antonin Scalia who died in mid-February 2016.  The only loser's, as I see it, in this monumental battle will be the poor nominee and the Republicans; this is a no-win situation for either party.  Whether the Democrats/Obama win depends on how they handle the battle or if they actually get their nominee through the potentially debilitating process.

It is even possible that. as rumored, President Obama may even nominate a well known moderate Republican; Nevada Governor Brian Sandoval (who has recently quashed that rumor).  On the other hand, others suggest he might nominate a sacrificial lamb in the form of a very liberal justice, just to poke the conservatives in the eye by making them stop the nomination process.

The issue is whether Senator Mitch McConnell will eat crow and actually hold hearings for whoever Obama puts forward in the near future ... or not, regardless of who is put forward. (A blatant case of stonewalling for which the conservatives have honed to a fine point.)  McConnell & co. assert that it isn't right that a president with 11 months left to his (soon to be her, in my opinion) term should put forward, nor should Congress consider, a nominee for a Supreme Court vacancy.  The argument is, that since this is an election year, the "people" should decide who the president will be to make that nomination.

Well, didn't the "people" already decide (twice in this case) who the president is and who has the right AND duty to carry out ALL of the responsibilities of that position ... including filling vacancies on the Supreme Court?  Yes they did!   As one of those "people", I want my president to do their duty for the entire 100% of their term, not just 75%.

It's unfortunate for the opposition party (historically, neither Party is guiltless) that Justice Scalia died at an inconvenient time for them; but the Constitution, which wasn't designed with Parties in mind (in fact, the opposite), didn't provide for the executive to not exercise that part of their job description.  No, it was expected for the president to exercise that prerogative until midnight of the last day in office. 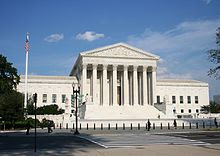 THE FRAMERS OF OUR CONSTITUTION, the original great compromisers, tried their damnedest to mitigate the power of factions (parties in today's parlance) from interfering with the function of providing effective governance for the people who created it.  They well understood the debilitating nature of "tyranny by the majority" as well as "tyranny by the minority" and tried to insert the checks and balances needed to thwart those who see balanced government as a bad thing, who think moderation and compromise are dirty words, and who see a government of the People, by the People, and for the People as an anathema to their own parochial interests.  But they didn't foresee or protect America from the Radical Right whose forefathers boycotted the Constitutional Convention (or left it when they saw the result was not going to be another emasculated central government like the Continental Congress) and who then voted against the ratification of the Constitution because it usurped their version of 1) liberty or 2) the right to enslave others.

At no time in American history did the Congress fail to function as much as it has since Republicans took control of the House in 2011.  Sometimes the outcomes weren't very good, but it functioned nevertheless.  With the rise of the radical Right in 1994, that came to an end.  Not in one fell swoop, but in increments starting with the Gingrich revolution, which rapidly shifted further to the Right while growing in power during the 2000s.  Then, in 2010, it lurched much further Rightward with the take-over of the GOP by the Tea Party, the child of decades of effort of a handful of ultra-libertarian billionaires (if you believe Jane Mayer's Dark Money) whose stated goal was to bring government to a halt; and they have largely succeeded, when measured against all previous Congresses.

Once a upon a time, not long ago, the Supreme Court nominee needed to have severe actual or political flaws before the Senate might not Consent to the President's choice; only 28 out of 150 nominations put forward as of 2010.  As you can see, they were spread somewhat evenly, although President Tyler holds the record for most failed attempts at four.  If your interested, it breaks down like this:

Of these:
Now the conservative Senate Majority Leader Mitch McConnell wants to "take no action" again, this time on purpose again.  There are historical cases that are similar.
At this point in time McConnell has talked to President Obama but still maintains his obstructionist position.  It would seem he has dug himself a very deep hole out of which he may not be able to climb.  And, if he can't climb out, he may very well drag the GOP in with him!  And, and if Trump wins the GOP nomination, as it seems certain he will, the combination one-two punch against the nation's sensibilities may very well be the cause of downstream Republican, particularly conservative, to lose.

If the loses are heavy enough, the loss of the Senate to Democrats is almost certain, but the House may be in jeopardy as well.

Posted by Unknown at 6:08 PM No comments: